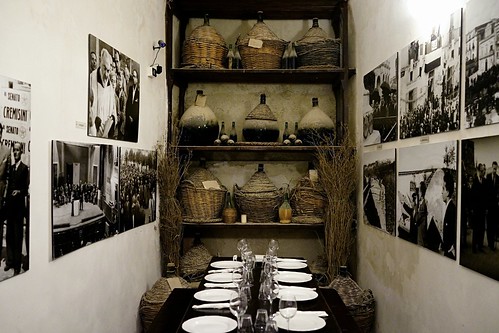 Since I arrived in Sicily I had the distinct feeling I was coping with one of the deepest-rooted and once-wealthy Italian cultures. I now feel this is the only other region in Italy, together with Tuscany, where the beauty and the good are worshipped to the highest levels. And the Sicilians are well aware of their roots. In this wine bar at Noto, for example, tens of largely printed old photographs (dated from 1914 to 1936) hang on the walls proudly showing the rich roots of this town and region. Realizing how much this region has been left behind (and alone) since after WWII makes me sick. Not its wealth, however. That has been not-so-democratically re-distributed among the northern Italian population.
I’ve done the post-production with Photogene, tuning white balance, (de)saturation, straightening, sharpening, and contrast. I now it’s time for me to start trying a new app, but I really love working with Photogene… maybe with the next one.